7 in stock (can be backordered)

The ROMulator Z80 is here, in early access release.

Early access in this case just means this is a device in active development, and while I don’t anticipate much if any change happening on the hardware side, there will be continuing improvements in firmware as more Z80 machines are tested with it. Unlike the 6502 version where several default profiles exist, the default configuration for the Z80 version has almost nothing in it yet and will be expanded as more machines are tested.

– DMA is not supported. Any regions of memory using DMA with devices other than the CPU are not replaceable by the ROMulator with this version.

– Bank Switching is not yet implemented. Many Z80 machines, including several Sinclair models, Kaypro, among others, use some form of memory bank switching to swap regions in and out of memory space for the CPU. The ROMulator has 128k onboard memory and in principle can support bank switching up to this maximum size, but it is not yet implemented. Any machine making use of bank switching will need some work on the Verilog code of the ROMulator to support this. Coming in future firmware updates.

If you are interested in helping with early testing with the ROMulator Z80, it’s ready now!

The ROMulator Z80 comes in kit form, and requires assembly. You will need a soldering iron and solder and assembly takes about 10-15 minutes.

Assembly is identical to the 6502 version and instructions for that are here: 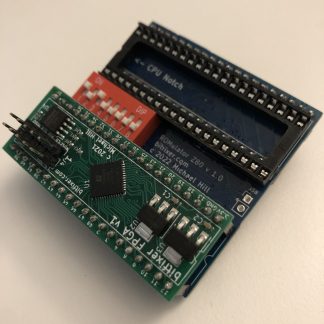