RAM/ROM Replacement and Debug console for 6502-based computers

About the ROMulator:
The ROMulator is a RAM and ROM replacement and diagnostic board for the Commodore PET, Apple II, and other 6502 based microcomputers. The ROMulator connects to the 6502 socket in your computer, and the ROMs to use are selected by a dip switch on the board. It allows you to view the memory of a running 6502 machine using the replacement RAM by halting the CPU and sending the memory contents over an SPI connection to a Raspberry Pi.

The ROMulator comes as a Kit as shown, and requires only through hole soldering, all surface mount parts are pre-assembled. It takes about 15 minutes to build and requires just a soldering iron and solder. A pair of snips is useful as well.

If you are interested in the programming cable to connect this to a Raspberry PI for programming/debug (not required, but convenient), that is available as a kit here:

You can also program and debug with the ROMulator using a standalone programmer without the need for a Raspberry Pi. This kit is available, including a D1 Mini (ESP8266 development board) and an interface board to connect to the romulator:

The ROMulator is open source, and the schematics and Verilog code for the ROMulator’s onboard FPGA are available at:

Check out my video using the ROMulator to help fix a PET 2001-N here: 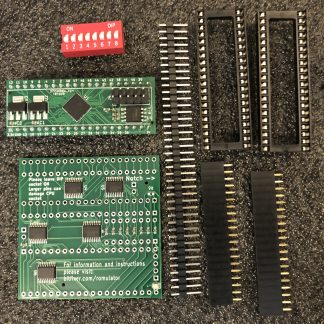